Developing a marketing strategy for a decentralized project is a complex undertaking that must take into account all the specifics of the market and the target audience. The agency offers a complex approach to promoting projects by relying on blockchain advertising, community buildup and a string of interrelated efforts that result in a comprehensive campaign deployed all market sectors for achieving maximum effect in presenting the project in a favorable light. 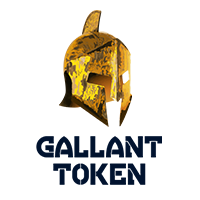 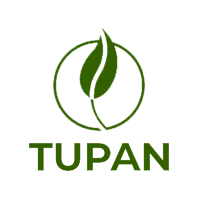 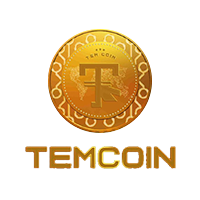 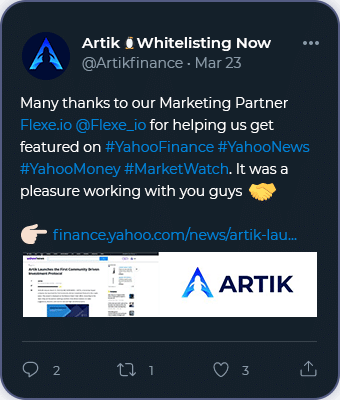 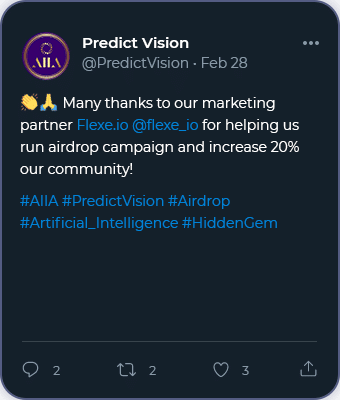 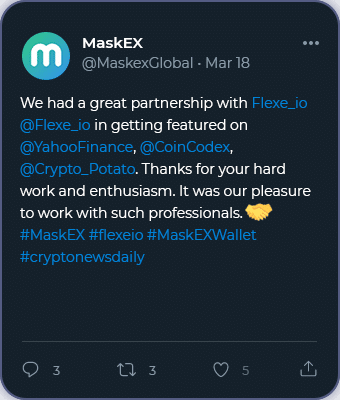 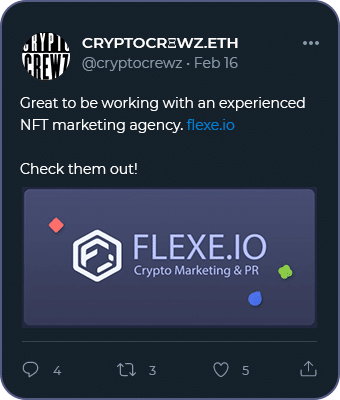 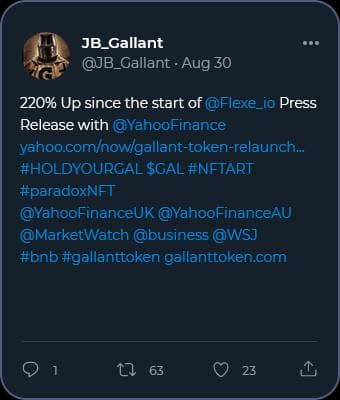 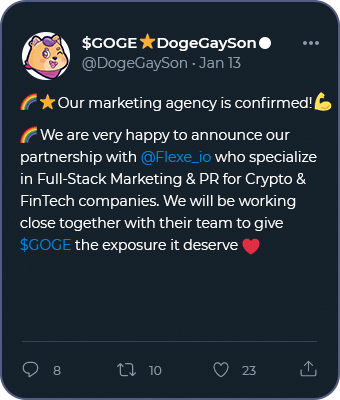 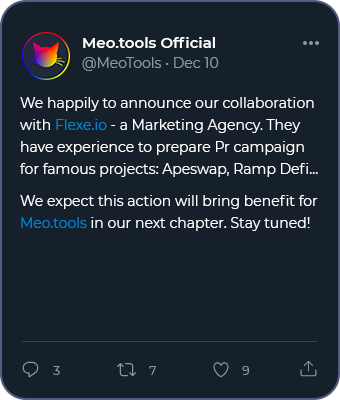 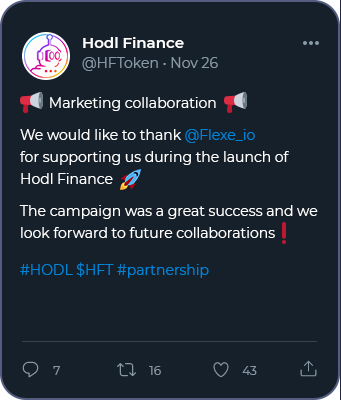 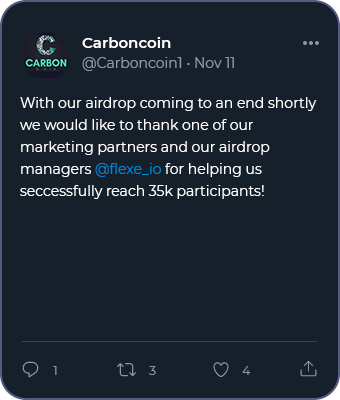 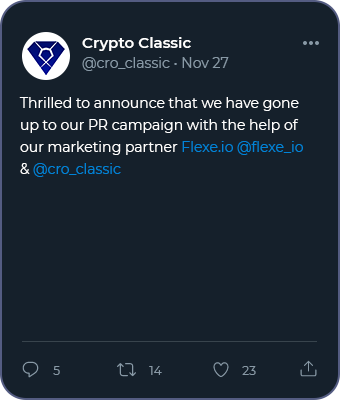 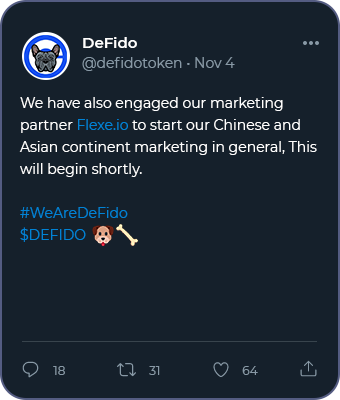 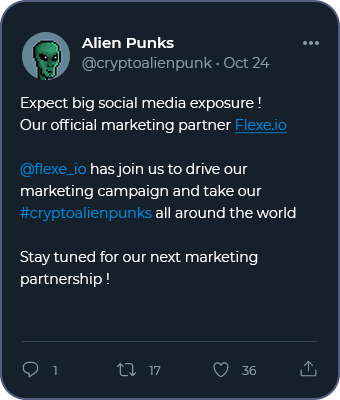 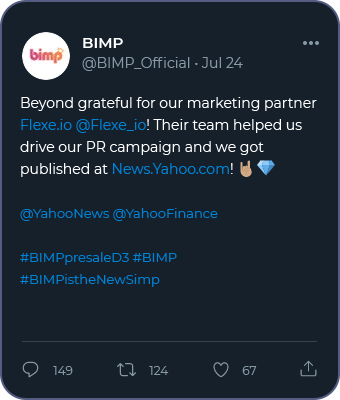 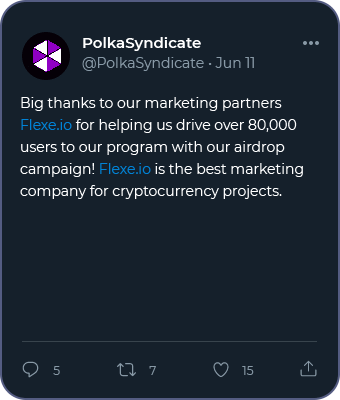 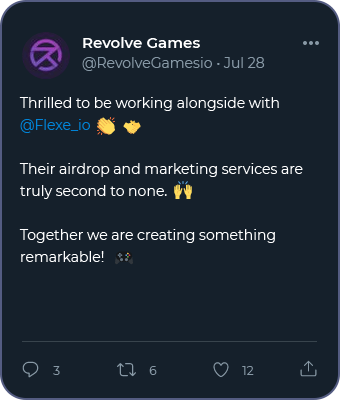 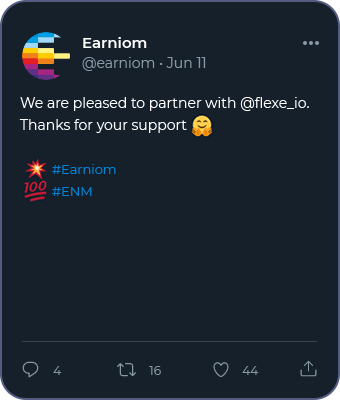 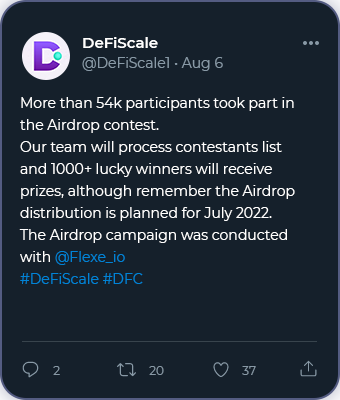 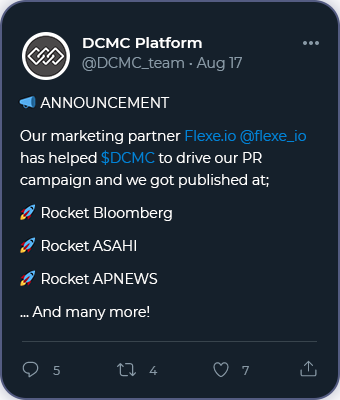 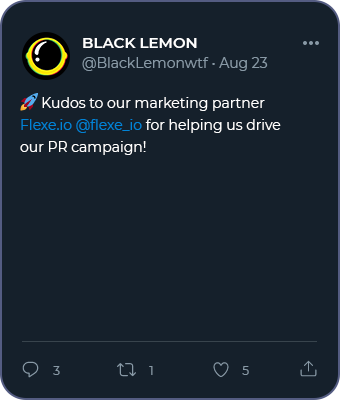 Flexe.io has a remarkable suite of services and can provide most of what you are looking for in ground-level marketing and raising awareness in the crypto world. brikcoin.net raised over 2.5 mln $ by August 11

We are more than satisfied with the services provided by Flexe.io After our first work together we are really looking forward to continue working and building a long term relationship!

Everyone at Moss.Earth is impressed with the speed and quality of services that flexe.io offers in Marketing and PR within the Crypto world. In a short time, they helped us to achieve great awareness for our product.

We have greatly enjoyed working with the Flexe.io Agency on launching our ICO, Retail CX Lab needed to have a presence on social media to connect with investors. We had been following Flexe.io marketing tactics as well as their social media accounts and determined that they had a high level of expertise in the online blockchain world. They were definitely the agency to lead us into the social space.

Flexe is one of the market leaders in consulting and marketing services in the field of ICO and IEO. This agency has been recognized in several rankings regarding the leaders of the advertising market in the crypto industry by portals such as Hackernoon as well as several others. The Soraix team is very satisfied with the cooperation with Flexe and we recommend this company as a strong and reliable business partner.

Working with Flexe.io is like having inhouse your own entire marketing team. They are simply the best in giving a solution for every need you have.

Flexe.io is professional and timely. Working with them on our press releases has been an enjoyable experience and we look forward for doing more business with them in the future!

GET A QUOTE
Get Access To 150+ Business & Crypto Media

In promotion, the first thing that has to be considered is the audience and the market specifics that a product or service is aiming to appeal to. The blockchain industry is a relatively recent market with its own characteristics and user sentiment that make promoting blockchain-based services and products a real challenge. The mentality of decentralized service users differs from that of average online application audiences, given the specifics of the blockchain industry’s virtues and pitfalls of rampant fraud that make users wary of any excessive promotion.

That is precisely why promoting blockchain projects and services is an undertaking that has to be managed by professionals – blockchain advertising agencies and specialists with years of experience on the market, those who wield a set of effective and proven instruments for the task.

What is Blockchain Marketing?

Blockchain marketing is not much different from its traditional counterpart in the essence that it tries to convey a positive image of a product or service to a target audience by placing special emphasis on specific competitive advantages and value offerings. But blockchain advertising is far more than mere ad placement and dissemination of information, because every decentralized product or service is first and foremost built on its community.

Therefore, effective blockchain digital marketing efforts are largely aimed at bringing together and retaining communities of users around the product. Projects seldom have the resources, time and willpower to divert efforts at conducting effective marketing campaigns by themselves. As such, it is considerably more efficient and cost-effective to resort to the services of a reputable blockchain PR agency that will undertake all marketing efforts based on its combined experience.

Blockchain marketing and advertising relies largely on the same instruments used in other industries. The toolset applied for promoting blockchain projects includes such familiar approaches as:

However, users will never be attracted to a project that does not boast an informative, well-designed website that is both clear-cut and easy to navigate. For effective blockchain marketing to be launched, a modern decentralized project website must contain a maximum amount of information in as limited a space as possible to cater to the fast-paced mindset of blockchain service users.

With the website ready to host users, the next step is attracting traffic that will consist of real users who have the capacity of carrying out target actions. The goal of the website will be to retain users by providing sufficient incentive for them to stay based on the information they receive, such as striking descriptions of the product, the team and the benefits on offer. Once contact has been made, it is up to the agency’s managers of social media channels to retain communities via chats, forum threads, airdrops and other means that will be proving the activity of the project, its transparency and honesty.

With a community developed, blockchain marketing takes on the next stage, which includes creating hype around the project to attract investor interest and liquidity. Blockchain marketing agency specialists know how to make effective use of Google to advertise projects and index relevant publications for better viewership and traffic generation.

With traffic flows ensured, the final stage is ushering users to carry out target actions. This is achieved through auto-funnels, constant communication with users, bonus incentives, newsletters, mailings and other instruments.

What We Can Offer

Only professionals must be attracted for promoting blockchain projects, as the slightest deviation from proven promotional strategies can mean the difference between success and failure.

That is why the blockchain agency’s reputation and scope of services are the key criteria that make it stand out as professionals capable of effective promotion. A good example of an all-round blockchain marketing agency with years of professional expertise is Flexe.io, which offers a host of over 30 services at competitive rates. More importantly, unlike many of its competitors, the agency provides ample proof of its competence via case studies, testimonials and client lists. Combined, such criteria act as the basis that projects should set when looking for an agency to promote their products.

Blockchain projects are a mix of users and technology that have to be leveraged for traction. The technology has to be highlighted and the users convinced that the service can yield benefits. Only professional agencies like Flexe.io can promote such a specific value proposition, lest blockchain projects are content with wandering the mists of blockchain marketing on their own at the expense of time, resources and success.

Here you can read about DeFi Promotion

And get a free Crypto Influencers guide for 2022

Flexe is a great Blockchain Agency and our team is here to provide you with quality solutions you deserve. Having many years of experience in delivering Blockchain Marketing services, we opt for the most effective solutions. We are a full-service Blockchain Advertising Agency and can help all Blockchain startups and Cryptocurrency entrepreneurs to develop, launch, managed and market successful Blockchain startups and ICO projects. Thanks to our commitment, you will be able to promote your products and gain a huge audience. At our Blockchain Marketing Agency, we use different ad channels and aim to help our clients promote their product to a broad audience. Today’s market is quite competitive and getting more new users is very important. That is why we are dedicated to offering the best Blockchain Advertising solutions combined with a professional approach. We offer promotion via Google Ads and social media networks, including Facebook, Reddit, Quora, Telegram, and YouTube. We will engage the blockchain-oriented audience to your project easily.

No matter what kind of services you want, we will cover your needs anytime. Whether you want to drive sales, generate leads or build brand awareness, this team will help you reach your goals easily. As your best Blockchain Advisor, we will develop a plan that will never disappoint you. If you want Blockchain PR, look no further than our team because we are the best in this field. All clients at Flexe get a comprehensive marketing support for the most effective promotion of their blockchain (including ICO) projects. We will develop a unique marketing for every client thereby maximizing the project’s potential. Being your perfect Blockchain Provider, we will help you grow your community and attract a huge audience. Thanks to the interesting blog posts, press releases, other types of content, the professionals at our Blockchain PR Agency create everything to meet the market needs and your own goals. Get our Blockchain Services and rest assured you are in safe hands.